To blame or not to blame, that is the question: Brandon University researcher explores ways to encourage healthier public discourse

People generally have a desire for truth and knowledge.

A few years ago, the answer to that question might have seemed obvious.

Back then, the conventional wisdom was that the vast majority of Canadians preferred to learn about the facts surrounding a particular issue before drawing any conclusions about it.

Today, many commentators wonder whether that is still the case. They question whether we have entered into a new era where truth and knowledge take a back seat to emotion and ideology.

As evidence, they point to the growing polarization of Canadian politics and the divisions of opinion on issues ranging from climate change to the handling of the Covid-19 pandemic.

The emerging trend is not lost on Cameron Boult.

An associate professor and chair of philosophy at Brandon University, Boult’s area of interest is in a relatively new field known as epistemic blame, which essentially amounts to the study of whether individuals can or should be blamed/blameless for adopting beliefs that are not based on an honest inquiry into the facts of a particular matter.

While that may sound a bit esoteric, the topic is more relevant today than ever given the public divide that has emerged over any number of issues, including the handling of Covid-19, vaccine mandates and the federal government’s decision to invoke the Emergencies Act following vaccine mandate protests in Ottawa and other parts of the country.

As Boult explains, his research aims to better understand the source of these kinds of disagreements, with a view to developing conceptual tools to promote healthier civic discourse.

To help support his work, Research Manitoba has awarded Boult a $17,850 grant, which has allowed him to engage with other scholars in the field, most notably at the University of Glasgow’s COGITO Centre for Epistemology. He has also published four major papers on the subject, and is putting the finishing touches on a book entitled The Puzzle of Epistemic Blame: On the Nature and Norms of Epistemic Relationships, which will make his work available to a wider audience.

Essentially, says Boult, the book explores why and how we criticize each other for epistemic or intellectual failings. As an example, Boult offers a scenario of two people who disagree on the issue of vaccine safety.

“So, if you’ve got a friend who is trying to figure out what to think about vaccine safety and they’ve got pre-existing things they want to believe about this matter, and in the process of inquiring they kind of just selectively avoid any evidence that goes against their existing beliefs, and just seek out evidence that confirms their beliefs, you might think that there is something intellectually flawed in that inquiry,” says Boult.

And after a period of time, says Boult, you may end up adopting a critical attitude towards your friend. But how critical should one be?

“Part of the research project looks at conceptual questions: What sort of attitudes and behaviours does our epistemic criticism consist of? Does it ever actually rise to the level of something like blame?” asks Boult. 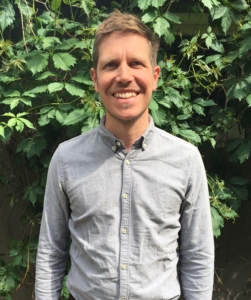 And if it does, how does that blame manifest itself?

Boult says this area of inquiry can tell us something about the relationship between our intellectual and moral lives, as well as the norms we adhere to and believe our fellow citizens should respect and accept.

The second part of the project, says Boult, examines how we should respond to one another for intellectually flawed inquiry.

“Is criticizing or blaming each other for intellectual failings something we should do, or are there more constructive attitudes we can take towards one another that would somehow be more beneficial for our communities and our political discourse?”

For the record, Boult believes that blame does play an important role in our political and personal lives.

For example, it is understandable, and perhaps fitting, that people who have educated themselves carefully about the human impact on climate change would feel critical towards someone who has decided in advance that they just don’t want to believe in climate change, and for that reason actively avoid all evidence in support of it.

That criticism would likely be more pronounced if such behaviours were being exhibited by someone within our social circle, particularly family members or friends.

“It seems to be a feature of our blaming practices – that they get more robust and more significant the closer we are to people, the deeper our relationships with them are,” he says.

And it is in these cases of close relationships that blame can often escalate into something called “relationship modification,” says Boult.

Returning to the example of issues surrounding Covid-19, “That’s exactly one of the things that has been so striking about the pandemic,” says Boult. “I think people really have lost friendships over this.”

“And I think that it is right that we do modify our relationships,” says Boult.

In the case of personal relationships, it is a way of sending a message that certain lines cannot be crossed. More broadly, at a societal level, this kind of approach – the idea of taking a critical stance – can be used to hold people in power to account, he says.

Of course, not everything is always so black and white, says Boult.

“There may be circumstances where trying to better understand where someone is coming from, or setting an example (for the desired behaviour) – those (actions) may have a better chance at being more productive and, under the right circumstances, have more value.”

Boult says he hopes his research can help people navigate these issues.

“I’m in the business of putting structure (on these questions) so we can sort through when  criticism is called for, and when something more constructive is called for.”

“When we take a critical stance, and blame each other, that has a tendency to create rifts, and has the tendency to polarize as well. But if we adopt the empathetic attitude and the constructive attitude… that could help with the healing process,” he says.

However, Boult says knowing when and how to take a more empathetic approach poses some obvious challenges.

“At the end of the day, there is a reason why we blame and criticize each other. It’s because we think those who we are blaming shouldn’t be doing what they are doing,” he says.

“So, there is a tension here. On the one hand, blame does have value sometimes. We do need it in our lives. It plays a role, on both an intellectual and moral (level). But, there are times when taking the empathetic, constructive stance is more beneficial and productive. And so, it is about… learning how to go in for the right response at the right moment.”

Boult also sees opportunities to use his exploration of epistemic blame to enhance the discussion in other areas, such as Canada’s efforts at reconciliation with Indigenous people.

He cites the work of Miranda Fricker, who wrote a book in 2007 entitled Epistemic Injustice. Among other things, the book argues that the power dynamics in society have created a situation whereby assertions from marginalized members of society are not given the same weight as those from more privileged groups.

“We just have this tendency through stereotyping and prejudice to not take members of marginalized groups as seriously in certain contexts or give them the kind of credibility that they deserve,” he says.

In Canada, for example, Indigenous groups might point to all sorts of examples where their concerns are not given appropriate consideration, from the lack of potable drinking water on First Nations communities to the issues surrounding residential schools.

“So what kind of testimonial injustice might there be in Canada? Members of Indigenous communities are marginalized groups. So when they speak about their lived experiences in this country, are there barriers to giving them the credibility they deserve?”

Boult says he doesn’t think Canadians think enough about testimonial injustice or the damage it can do to various groups in society.

“The concept of testimonial injustice isn’t in the every day lexicon,” he says. “People aren’t aware of this concept. But one of the fundamental aspects of it is that it is something that happens in our minds that we are not even really aware of…. It operates at a sub-personal level that we don’t realize is going on.”

“If Fricker is right, that our credibility judgments of members of marginalized groups are affected by social power dynamics, then maybe that is a barrier that we need to learn more about and to recognize,” he says, adding that becoming more aware of the problem could be one way of counteracting it.

“As a philosopher,” says Boult, “I think one thing I can do that has the potential to have an impact (on testimonial injustice) is creating… conceptual tools to help people become more self-aware that these sorts of things do go on in our society and in our own minds.”

Of course, all that depends on whether people actually do have a desire for truth and knowledge.