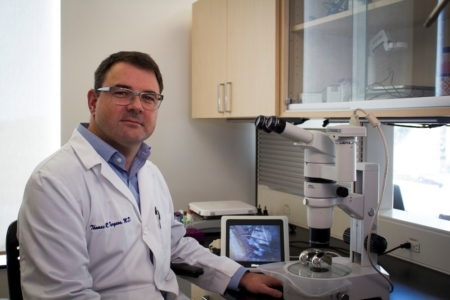 Dr. Thomas Turgeon in his lab at the Concordia Hip and Knee Institute. (Photo: Concordia Foundation)

That’s to be expected, given that he has performed more than 4,000 hip and knee replacement surgeries over the last 15 years.

And if there is one thing he has learned during all that time, it is that research is key to improving the outcomes for patients, here in Manitoba and around the world.

Indeed, Turgeon’s commitment to research is one reason why he was recently named the first Arthroplasty Research Chair at the Concordia Hip and Knee Institute, which is located on the campus of the Concordia Hospital in northeast Winnipeg.

Created last year by the Concordia Foundation, the chair carries with it a research budget of $500,000 over the next five years ($250,000 each from Concordia Foundation and Research Manitoba), and is expected to enhance the Institute’s reputation as a leading centre for joint replacement research in North America.

“He has led, conducted, or contributed to dozens of research projects examining hip and knee replacement surgery from virtually every angle,” Kothari said upon Turgeon’s appointment last June. “His leadership has helped elevate the Concordia Hip and Knee Institute into the unique, ground-breaking organization it is today: one of the only hip and knee institutes in the world where clinicians, researchers and engineers work together under one roof.”

Karen Dunlop, CEO of Research Manitoba, says the importance of investing in research is underscored by the fact that the number of patients requiring hip and knee care continues to grow.

“This project (creation of the research chair) will support our shared commitment to excellence by enabling Dr. Turgeon and his team to accelerate their research to help Manitobans get back on their feet and improve their lives,” she said of the appointment.

He says the chair will be used to boost research capacity at the Institute in several areas by helping to develop innovative surgical techniques and technologies, improve access to health-care services and support, and advance training to enhance patient outcomes.

Moreover, says Turgeon, the chair will provide the Institute with the flexibility it needs to pursue lines of investigation that can compliment those already funded by government or industry.

“When we look at where research funding has gone over the last 15 years, more and more it has been pushed to small, focussed, industry-sponsored studies,” says Turgeon. “Which is great — we’ve run many of them and had great success doing so, but that does pigeon hole us a little bit to answering the questions that industry is interested in having answered.”

“Which is excellent because those are the kind of studies that only government can support and fund,” he says. “But what’s been lost in that has been smaller studies that can be done at one or two sites that (scientists believe) are a research need.”

A case in point involves a recent quality assurance study at the Institute into whether a person’s access to joint replacement surgery is influenced by various geographic and socio-economic factors. In order to do that, Turgeon says researchers are trying to determine whether people living in one postal code are receiving access to care faster than those living in another.

For example, the study will compare the experience of patients living in different neighbourhoods within Winnipeg as well those living close to urban centres and in more remote locations. Among other things, the study will look at how long a patient must wait for a consultation with an orthopaedic surgeon, and whether some patients must wait longer than others for care after the onset of arthritis, which can hasten the need for joint surgery.

The answers to these questions, along with other data, will help shed light on whether the health-care system is providing equitable access to care, and, if not, how it can be improved, says Turgeon, noting that the initial study could lead to more comprehensive research in the future. 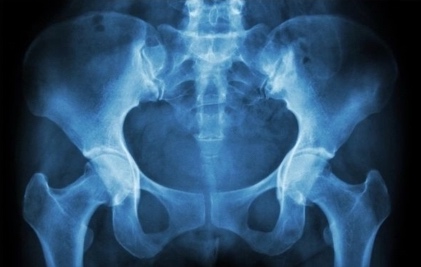 While the Institute has carried out this type of research in the past, there are times when important questions fall between the cracks.

“It’s not that this type of research is foreign to us,” Turgeon says. “The challenge has been trying to have the capacity to do a little bit of pilot research” that would better define the questions that need to be explored. “And to approach various funding agencies and say, ‘This is what we are seeing, and we think that further investment (in research) is warranted in this area. That’s really one of the big things that having some capacity to do some research on our own allows us to do – rather than to be beholden to a specific grant or specific research contract.”

Funding from the research chair will also support some of the resources at the Institute that are needed to carry out high-level work.

For example, the Institute maintains a secure database of more than 25,000 patients going back many years that allows surgeons to compare hip and knee installations that were done using various devices under different circumstances over time. “Without having that database maintained and updated, we’re not able to go back and ask those questions,” says Turgeon.

Another important tool that will be supported by the chair is the Implant Retrieval Analysis Program, one of only two operating in Canada.

As Turgeon explains, the vast majority of implant devices that fail across the country are removed and disposed of as medical waste. “Nobody looks to see what happened to that implant: did it work well, did it do what it was supposed to do, or did it not hold up?”

Under the retrieval program, the Institute collects implant devices and stores them in a warehouse where they can be analyzed for a variety of performance-related issues. So, if a surgeon identifies a problem with a device, the team can look at the other devices that have been collected to determine whether there is a pattern of failure.

“Those kinds of things form the backbone of the kind of studies we do,” he says. “Having the research chair allows us to support some of these things running in the background that allow us to do a lot of the work that we do.”

Research chair funding will also be used to enhance communications, with plans to upgrade the website and expedite the publication of the research that is being produced by the Institute. 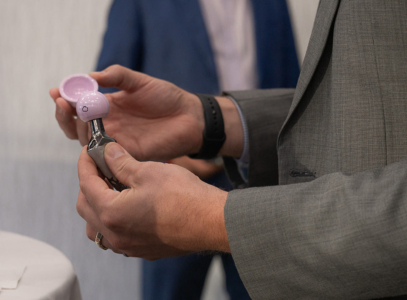 The ball and socket of a hip replacement device. (Photo: Concordia Foundation)

“Communication is one of the key tenets of research,” says Turgeon. “If you do research in a bubble, it is of no value to anyone. And one of the challenges we have as orthopaedic surgeons is finding time to sit down and spend days writing a paper and rewriting a paper to try to get it where it is ready for international publication.”

The establishment of a research chair is the latest step in the ongoing evolution of the Institute, which can trace its roots back to the early 2000s when Turgeon and a group of other like-minded orthopaedic surgeons, including Drs. David Hedden, Collin Burnell, and Eric Bohm formed the University of Manitoba Joint Replacement Group.

Over time, the group worked with a number of people in government and within the health system, including former Concordia Hospital COO Henry Tessman, then Concordia Hospital Foundation Chair Les Janzen, and Laurie Walus, then Chief Nursing Officer of Concordia and Director of the Winnipeg Regional Health Authority’s surgery program, to develop an idea for a centre that would specialize in joint replacement surgery, bio-engineering, and high-end research. The end result was the Concordia Hip and Knee Institute and the Orthopaedic Innovation Centre, which serves as the Institute’s research arm.

Opened in 2009, the 60,000 sq. ft. facility, located across the street from the Concordia Hospital, now houses about 35 surgeons, scientists, technicians, engineers, and support staff. Together, the surgeons perform as many as 1,600 joint replacement surgeries a year at Concordia Hospital and over 20 research projects annually at the Institute.

Sue Barkman, Executive Director of the Concordia Foundation, says the idea for the research chair was driven largely by donors, large and small, including many former patients.

As Barkman explains, she did a small-scale campaign about two years ago for the Hip and Knee Institute “just to test the waters.”

“We were astounded at the response. Their patients were the first ones who came to the Foundation and said, ‘We want to support this. These are our doctors. We love them. Research has made my life better.’”

Then last year, shortly after the Foundation decided to push forward with a plan to establish a chair, a donor came forward with a donation for $200,000.

“So that set the tone,” says Barkman.

Eventually, more donors would come forward and Research Manitoba agreed to partner with the Concordia Foundation on funding the research chair.

“That put it over the top,” says Barkman.

While large donations certainly ensured the campaign for the endowment fund got off on the right foot, Barkman says smaller contributions, especially from patients, also made a difference.

Many patient donors, she says, have built a trusting relationship with their doctors.

“They write notes with their cheque, and say, ‘Thank-you.’ It really warms your heart,” she says.

* The Hip and Knee Institute serves more than 5,000 patients a year from Manitoba and parts of Ontario, Saskatchewan and Nunavut.

* The Institute is studying a new reverse hip replacement. Only 24 people in the world have had this experimental procedure aimed at reducing painful joint dislocations, and they’re all from right here in Manitoba.

* Over the past 15 years, the Institute’s Implant Retrieval Analysis Program – only one of two in Canada – has collected more than 4,000 implant devices. It has also published more than a dozen research studies involving implants, helping surgeons in Winnipeg and around the world.

* The Institute currently has 35 surgeons, nurses, technicians, engineers and support staff, and performs about 40 per cent of the joint replacement surgeries in Manitoba.