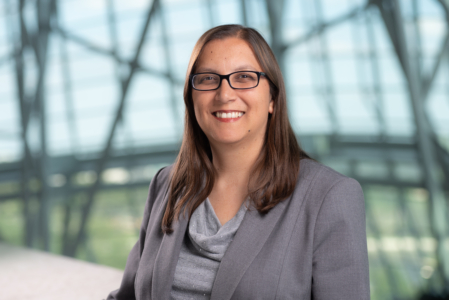 Mena Gainpaulsingh was in her teens when she first learned that she had a hip problem.

The femoral head of her thighbone, also known as the “ball,” had stopped growing and was too small to properly fit in the socket of her pelvis bone. The condition, she was told, would likely lead to the development of arthritis in her hip in later life.

At first, the condition did not pose too much of a problem.

But by the time the 47-year-old Winnipeg woman entered her twenties, the condition started to take its toll. Not only did she start to experience chronic pain, she also developed a slight limp.

Eventually, even everyday activities started to pose a challenge. As an example, she cites one occasion when she had to stand while taking a train in Great Britain.

“I was standing for over and hour, and I remember being close to tears because of the pain. But because I looked young and healthy, I felt I couldn’t go and ask someone to give up their seat.”

Gainpaulsingh would spend the next 25 years living with her condition and the accompanying pain. But, last year, she decided to do something about it.

“It was something I had become used to,” she says, explaining how the chronic pain gradually intensified over the years.

And she is not alone. Thousands of Manitobans suffer with knee or hip pain that significantly undermines their quality of life. Fortunately, many patients are able to get relief through various medical procedures, including hip and knee replacements.

Moreover, Winnipeg is home to the Concordia Hip and Knee Institute, one of Canada’s leading joint replacement research centres. The work carried out here and elsewhere helps ensure patients receive the very best care available, says Dr. Thomas Turgeon, who is Gainpaulsingh’s doctor and the Arthroplasty Research Chair at the Institute, which is located on the Concordia Hospital campus in northeast Winnipeg.

The journey to relief from joint pain follows a familiar path for many people.

Gainpaulsingh, for example, tried to manage her pain for years before deciding in 2020 to seek help from a physiotherapist. He was able to help a bit, but, eventually, the pain became too much to bear. “I was in so much pain, I thought, ‘Okay, I have to see my doctor about this.’”

Upon examination, it was determined that, due to deformity in her hip, Gainpaulsingh had developed osteoarthritis in the joint. Her physician then referred her to Turgeon, who recommended that she receive a hip replacement.

“It was all a bit of a shock because I had (convinced myself) that it wasn’t that bad,” says Gainpaulsingh, even though by this time she was occasionally using a walker to get around and was incapable of doing the simple things in life, like playing with her seven-year-old child.

“You get used to pain, and you get used to normalizing it,” she explains, noting that her hip seemed to deteriorate dramatically over a six-month period.

Nonetheless, Gainpaulsingh took comfort in the fact that her hip problem could be addressed.

To prepare for surgery, Gainpaulsingh embarked on an exercise program designed to help strengthen her muscles to promote faster healing following the operation.

Gainpaulsingh was sedated for the procedure, but remembers slipping in and out of consciousness during surgery, which took about an hour to complete. “They sedate you, but you’re pretty much unconscious. I remember waking up a little bit at one point and I remember them moving my leg around.”

In many cases, patients undergoing a hip replacement can expect to be in and out of hospital in one day. But Gainpaulsingh was kept overnight.

“The way it works is that to be there only for the day, you need to get up and walk with a physiotherapist (shortly after surgery) and I couldn’t do it because the pain was too high, so I ended up staying overnight.’

It took about three months for Gainpaulsingh to rehab and recover from surgery, a little longer than normal because she had some tendonitis that she had to work out.

Nonetheless, she says recovery went smoothly, adding that she was up and walking the day after surgery. “I could not get my head around how I could be walking” so soon after surgery. “That was astonishing,” she says.

“Don’t get me wrong. Following hip surgery, it is not the easiest thing in the world,” she says, noting that she did feel some pain for a while after the procedure. “But it was easier than I thought it would be.”

As time went on, the discomfort continued to subside, and by fall she was feeling something unusual: pain-free.

“Now, I am doing things I haven’t been able to do for many years,” she says. “Everything feels so different. My legs are stronger, I’m more nimble. I can get up and do things easily that I couldn’t do — like sitting on the bottom step of my stairs the other day. I had my feet on the ground, and I was able to sit on the bottom step. I’ve never been able to do that,” she says.

Perhaps most surprising, is that the hip replacement device does not feel foreign to her. “I don’t feel anything at all. There is no difference from one hip to the other.”

“It’s a remarkable (procedure),” she says of the hip replacement. “It is the thing that people say it is in terms being life changing.”

Turgeon says a patient like Gainpaulsingh can expect a hip replacement device to last more than 15 years, although newer ones may last even longer. It’s hard to estimate the longevity of newer devices because you have to wait until they expire, often more than a decade into the future, to find out how well they have performed.

However, he says there is no doubt that patients today are benefitting from the vast amount of research that has been carried out in the field over the 20 or 30 years.

“There have been dramatic changes and improvements in terms of how we are managing these patients, and that has all come along with research and vetting of new protocols and procedures.”

For example, he says that 20 years ago, it wasn’t uncommon for a patient undergoing joint replacement surgery to stay in hospital for three to six days.

But research suggested that day surgery for joint replacements would be more efficient and result in better outcomes for patients.

“Now, we have been doing hip replacements as day surgeries for the last few years. We’re just about to start doing knee replacement as day surgeries,” says Turgeon. “We’re also looking at new protocols and new pain management strategies to get patients mobilized more quickly and get them home.”

The approach to surgery has also changed over the years, thanks to research.

As Turgeon explains, 15 to 20 years ago, there was a theory being advanced that patients would benefit if surgeons made small incisions when performing a joint replacement procedure. But subsequent research showed that in fact, small incisions made no real difference to patient outcomes. Instead, it was determined that pain management and getting patients mobile as soon as possible were far more effective in terms of enhancing patient outcomes.

“That’s what really made the difference. The length of the incision (made during an operation) did not have as big an impact.”

That said, incisions are smaller today, only because there is no need to make one larger than it has to be to get the job done.

“That’s had a dramatic impact on the survival of those devices,” he says.

Since then, there has been continued evolution. “We have had improved metallurgy on many of the (hip and knee) implants. We’ve got improved coatings and backings that improve the initial contact (with bones) and the initial fit of implants,” he says.

“All those gradual improvements have come through research and engineering and the science of looking at what works and what doesn’t work as well,” he says.

As the Concordia Foundation’s Arthroplasty Research Chair, Turgeon is hoping to help propel local research into joint replacement surgery to the next level.

“We’re trying to deal with all the different aspects that impact patients,” he says.

“We know longevity (of hip and knee replacement devices) is a major issue, and we want to know that whatever changes we make will improve the longevity of the device,” says Turgeon.

“We want to reduce the risk of complications. We want fewer side-effects and faster recoveries so (patients) can mobilize more quickly so they can get back to their normal, daily activities that they have been missing for so much time leading up to their surgery. We’re trying to attack all of those things… by studying individual patients that move through our practices.”