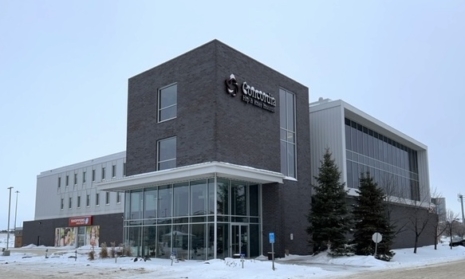 The Concordia Hip and Knee Institute is located across from the Concordia Hospital in northeast Winnipeg. (Photo: Research Manitoba)

The new knee replacement device arrived at the Concordia Hip and Knee Institute in 2009 with a certain amount of fanfare.

Made of high-grade titanium, polyethylene (plastic) and a newly-developed metal alloy, the device was considered state of the art for its time and was expected to last longer than its predecessor.

And, indeed, the device did appear to perform well, at first.

But then surgeons at the Institute started to identify a problem. In some cases, damage to the device was noted on the new alloy when patients underwent second surgeries to correct problems. The damage to the alloy surface had the potential to cut into the plastic and shorten the life expectancy of the joint replacement.

“It actually had some very positive characteristics in terms of wear,” says Dr. Thomas Turgeon, an orthopaedic surgeon at the Institute. “But what we noticed in the operating room is that every once in a while, we would see some damage to the surface of the device.”

The discovery didn’t happen by accident. The Institute, located on the Concordia Hospital campus in northeast Winnipeg, is one of the top joint replacement research centres in North America and is one of only two in Canada to run a hip and knee implant retrieval analysis program to test and evaluate the performance of orthopaedic devices.

In other words, the Institute’s team is well positioned to identify potential issues with various devices and make recommendations on how to address them.

In this case, the obvious question was whether the problem identified by the Institute’s team was due to a design flaw or surgical technique?

After some discussions with the manufacturer, the staff at the Institute got to work. They collected devices through the retrieval program and examined them thoroughly.

Eventually, says Turgeon, they were able to determine that the problem was being caused by the technique used to insert the device into the knee.

As outlined on the PeerWell health provider website, a knee replacement device essentially consists of three or four parts:

* A femoral component, which is a metal piece attached to the bottom of the thighbone.

* A tibial component, which is a flat piece of metal that sits on the top of the shin bone.

* A plastic insert, which sits between the femoral and tibial components, providing the knee with the ability to flex back and forth.

* And, in some cases, a patellar component, which is a dome shaped piece of plastic that replaces the surface on the back of the knee cap.

During knee replacement surgery, the bottom of the thigh bone and the top of the shin bone are resurfaced. The femoral and tibial components are then attached accordingly, and the knee is placed at an angle of about 130 to 140 degrees so the plastic insert can be installed.

“But when you do that,” says Thomas, “the back edge of the shin bone piece wedges up hard against that part of the (device) on the thigh bone (component),” he says. “So, what was  happening (with the device in question) was the two sides, before the plastic spacer was inserted, were wedging up against each other and injuring each other.”

To solve the problem, the team at the Institute recommended placing the knee at an angle of 90 degrees when inserting the device, a move that would reduce the risk of the two metal components wedging up against each other and reduce the risk of damage.

Today, thanks to the research carried out by surgeons and technicians at the Institute, the device in question continues to be used around the world with great success.

“They put in millions of them, so (the Institute’s work) has had a wide-ranging impact in terms of how the technique is done, not only to reduce risk of injury to that device, but it likely has also shifted how other manufacturers consider putting in their implants as well. No one recommends (inserting a device) while the knee is in deep flection anymore.”

The knee device study is just one example of how research at the Institute can lead to improved care for patients, not just here in Manitoba, but around the world.

And it is expected that the Institute will have even more impact in the years ahead with the recent decision to appoint Turgeon as the Institute’s first Arthroplasty Research Chair. The appointment carries with it an award of $500,000 over five years for research, including $250,000 each from the Concordia Foundation and Research Manitoba.

A more recent example of the Institute’s research team in action involves a study into the effectiveness of a new hip replacement device developed by a company based in Florida.

Typically, a hip replacement device is made up of a number of parts, including a ball and a cup, that essentially allow for movement of the hip. A metal stem with a ball is inserted into the patient’s femur. The ball then fits into a cup, which replaces the socket in the patient’s hip.

The new device reverses the position of how such components are assembled by putting the ball on the pelvis side and the cup on the thigh bone side, says Turgeon.

“This has been done for a number of years in shoulder replacements, but it’s never been proposed for hips.”

The big question, of course, is whether this new device will be better than its predecessors.

“Hip replacements do have a risk for dislocation,” says Turgeon. “It is one of the fairly common reasons why patients might have to have a (second) surgery” so it is important to determine whether the new device in question will serve the patient well over time.

Specifically, researchers want to know whether the new device will remain solidly attached to the hip and thigh bone.

“When you totally throw things on its head, questions are asked,” says Turgeon. “Could this (the new design) create an issue, in terms of adding more force, in terms of how these devices are loading on the bone? Would they come loose? Could they become loose over time because they are putting more stress on the bone?

“The only way to (answer the questions) is to test the devices in patients to see if they become solidly fixed to the bone or whether they are at risk of loosening.”

In order to do that, the research team is using a technology called radiostereometric analysis to examine how the device is performing once installed.

The process involves implanting metal beads into the thigh bone and hip and then using X-ray equipment to measure where the hip device is relative to the marker beads.

Turgeon says radiostereometric analysis (RSA) is superior to using traditional X-rays of the hip replacement device to determine whether it has loosened or moved.

“If you were to just take an X-ray (to determine if the implant moved relative to the bone) the measurement is only accurate to two millimetres. So if it (the hip replacement device) moved by a millimetre, you are probably not going to be able to detect that,” he says.

“The problem is that if you have an implant that is moving even a millimetre or so, that’s actually a lot of movement. That should be anchored to the bone,” says Turgeon.

In addition to providing greater accuracy, RSA technology also allows researchers to expedite their work. Some research projects that might have required observation of 150 to 200 patients over ten years can now be done with 20 or thirty patients over two years.

“We’ve done that with a number of implants,” says Turgeon, explaining that the research can help detect problems with implants before they are installed in millions of patients.

Most of the studies are essentially clinical trials on devices that have already been approved by Health Canada. But the most recent study is being done on a device that is still awaiting approval.

Turgeon says he expects to publish the first stage of the results in 2022 with additional results over the next three to five years.